Yesterday I found a powershell script using urlscan.io which can be found. I didn't (and still don't) have any idea about the origins, being benign or malicious. Spoiler, it is (just) a meterpreter reverse-https payload being delivered using Metasploit's Web Delivery.

Urlscan is a great and powerfull tool to analyse webpages. It delivers reports about how the page loads, creates screenshots, stores interesting files and extracts all kind of indicators. Urls can be scanned manually or by the api. There are many automated submissions, like links that have been included in emails or are suspicious. The service helps to find other domains running from the same ip, similar pages and campaigns.

Searching for 1.ps1 using urlscan delivers all kind of powershell scripts (many malicious), as also the one I found. Just to add some context, I searched for other occurences of the ip address and file hash delivers, but found just one single result.

The powershell contains a base64 encoded payload which will be executed by starting a new powershell session with the script as argument. Using Cyberchef it is easy to decode the base64 payload as can be shown here. Multiple of my dear handler colleagues have written about this useful service already. Cyberchef (runs client side only) makes it easy to create recipes, that will transform the data by just dropping new operations (which are many predefined) to the recipe. This step only base64 decodes the payload, but the next step deflates the payload also.

Step 2 contains the encoded reverse-https Meterpreter payload that will be loaded and executed in memory. If we now extract the payload and extract it using another recipe we have the shellcode and we'll load this into Ghidra. Ghidra is the Software Reverse Engineering (SRE) suite of tools which are developed (and now opened) by the NSA. Currently the github repository contains only a placeholder, but it says it will be made available opensource. There has been tweeted a lot about Ghidra and overall reactions are positive. Positive reactions are about the decompiler, the ability for collaborating with colleagues, support for adding multiple binaries to a single project, ability to undo, diffing, many supported processors and the analysis. Negative reactions are that it is based on java, supports no debugging and (steep) learning curve. A more thorough overview can be found in this article of Joxean Koret.

Just to highlight a few features of Ghidra, we'll load the binary. After loading the file we have to pick the language, which is x86 32 bits and the binary can be analysed. 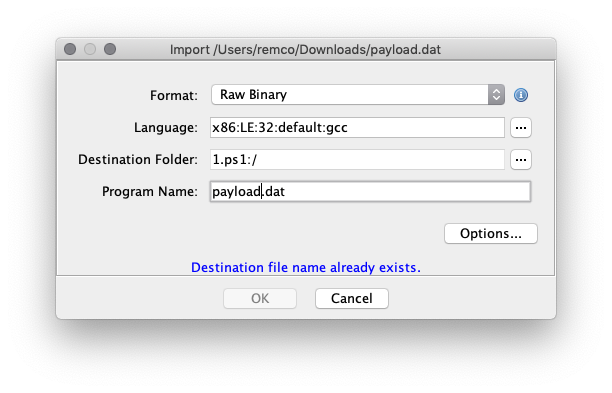 After importing it will show a small summary about the results. 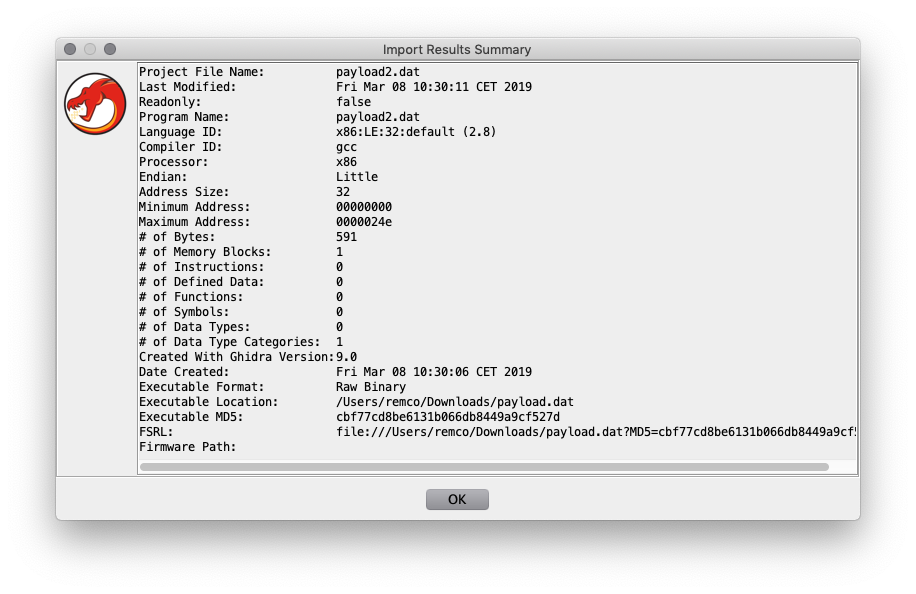 The payload start address (0x0) needs to be disassembled manually, as it doesn't recognise the code. After disassembling the first bytes, the other code will following and you'll get the this screen. The code can be annotated, functions created, diffed etc. 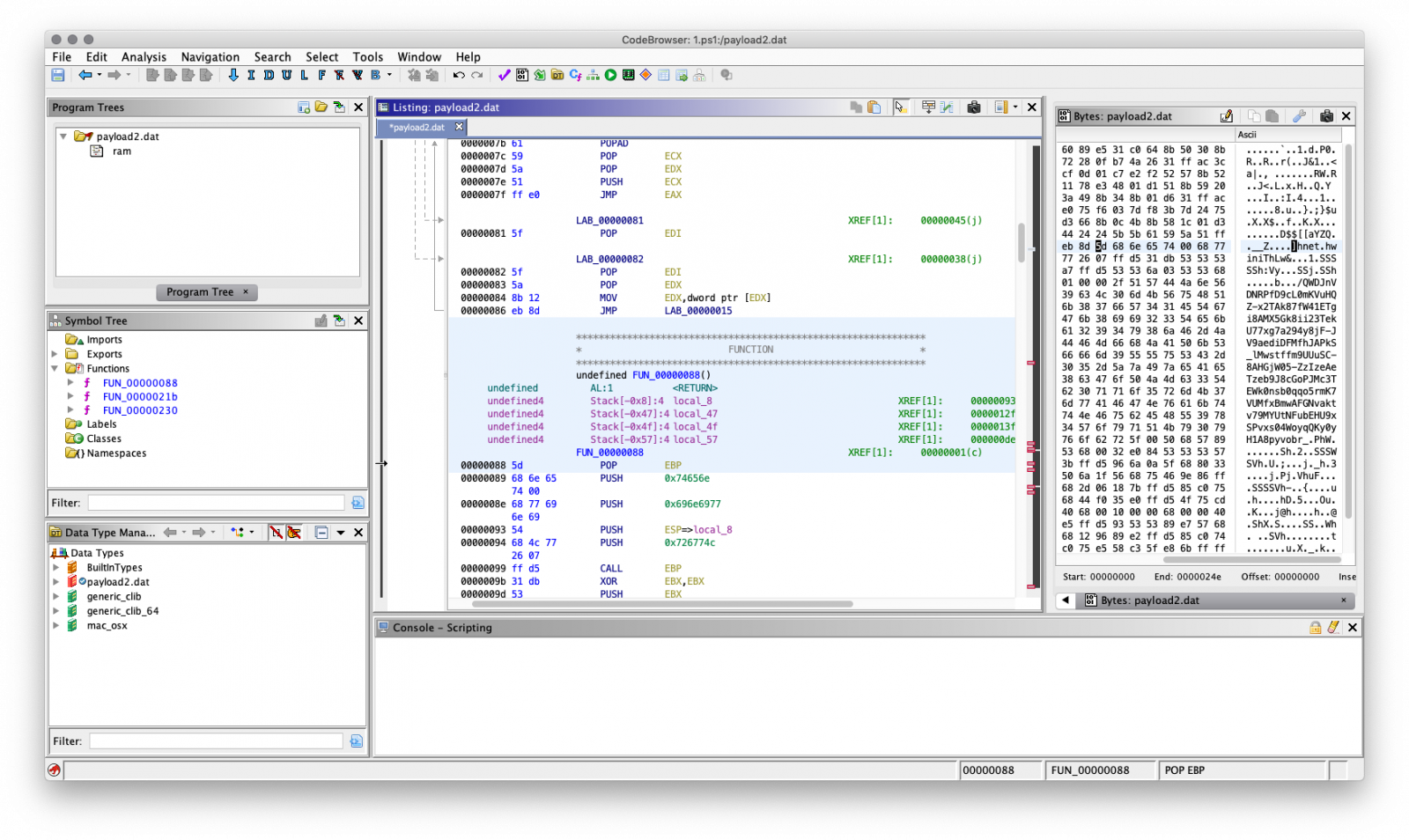 Ghidra will show the decompiled function next to the assembly view, a sample of decompilated function (the http request and response part) looks like this. 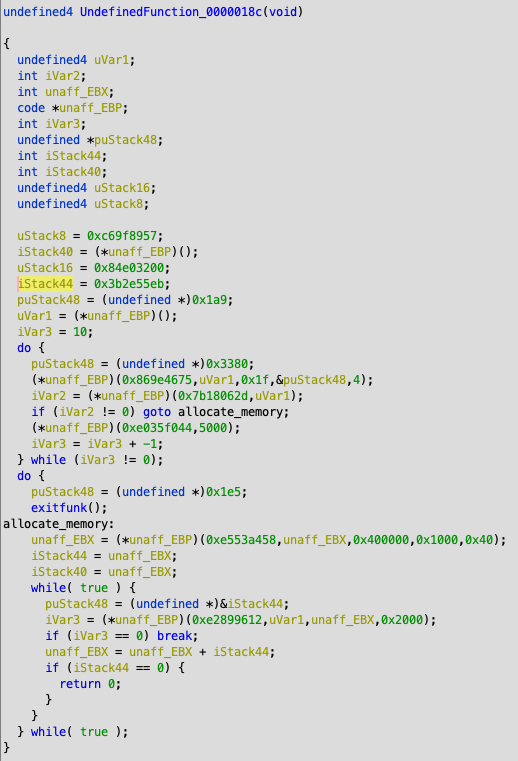 The payload uses a hashed functions to prevent presence of strings within the payload containing the system functions, which makes it less readable.

After analyses this is just a default Meterpreter payload where a reverse https shell will be opened to a Meterpreter handler.