DNS changer Trojan for Mac (!) in the wild

We received some reports of various companies (http://www.intego.com/news/ism0705.asp) reporting about a Mac DNS changer Trojan in the wild. As I happened to receive a sample of it, I decided to analyze it quickly.

The whole Trojan is relatively simple and works almost exactly the same as its brother for Windows  operating systems . In case of execution, the Trojan changes the DNS settings on the machine and reports back to the C&C server.

While the Trojan is relatively simple and not a big threat, two things came to my mind immediately: the bad guys are taking Mac now seriously – this is a professional attempt at attacking Mac systems (and they could have been much more damaging really). The second thing that folks at Sunbelt noticed (http://sunbeltblog.blogspot.com/2007/10/screenshot-of-new-mac-trojan.html) is that when they sent a sample to VirusTotal there were 0 (zero, nada, nilch) products that detected this.

So, let’s see what really happens here. The “social engineering” part has been seen million times – an unsuspecting user visits a web site with a movie on it, however, he needs to download a new codec in order to view it. On Windows, that new codec is typically a PE executable, for Mac the bad guys prepared a DMG archive (DMG files are like ISOs). The user is then prompted to install the package and during this process he will have to supply the administrator credentials. Yep, it’s game over from this point in time (and the attack is exactly the same as on Windows – keep in mind that these users *will* willingly supply these credentials. 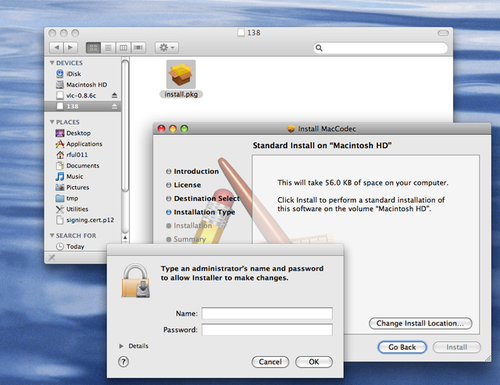 Now that we know what happens, let’s see how this whole thing works. I analyzed this on a Linux machine so I first had to convert the DMG file into something Linux can read (an ISO). There is a simple dmg2img utility available from http://vu1tur.eu.org/tools/ that does the job perfectly.

Once you converted the file to an ISO image, you can mount it and see what’s going on. The most important directory is Resources which contains scripts that are executed before and after the installation. The files that get installed are kept in the Archive.pax.gz file – it’s a gzip compressed cpio file.

The preinstall/preupgrade files from the Resources directory get executed immediately after the installation starts (and they do the main job). These two files are just shell scripts which change the DNS server settings on the machine by using the scutil utility. Here’s what they set the DNS servers to:

(Yes, the IP addresses are familiar). The scripts also create a new cronjob that gets executed every minute. The cron job executes a file called plugins.settings, which is just a copy of the preinstall/preupgrade files – it makes sure that the DNS servers stay as those above and that the cronjob is not removed.

Finally, the postinstall/postupgrade scripts execute a Perl script called sendreq. This Perl script collects some information about the local machine (uname –p and hostname), Base64 encodes them and sends the information to the C&C server (85.255.121.37). An interesting thing is that this gets submitted as the Accept-Language: header so it should be easy to write a Snort signature to catch this.

As I said, although the Trojan is really simple, it could have done much worst things (once the installer script has root privileges, it is game over anyway). This malware shows that we must not ignore Mac machines and that Mac users should not think they are invulnerable just by using a Mac and that they can click on absolutely everything.

From the network point of view – pay attention to DNS traffic as any requests that leave your network, and are not from your DNS servers are either coming from infected or misconfigured machines.

Matt Jonkman at Bleedingthreats.net released a Snort signature that will detect infected Mac machines reporting to the C&C server by checking the Accepted-Language header. I’m pasting the signature below:

Keywords:
1 comment(s)
Join us at SANS! Attend with Bojan Zdrnja in starting

Mankind has always had a desparate need to identify its environment. Only by studying our surroundings, we’ve been able to make changes that help us live better. This is also valid for the virtual world we ourselves created.

Complicating matters though, there are multiple parallel maps which essentially cover the same infrastructure, but from different points of view. There are network diagrams, huge maps of the internet and those showing how individual cities interconnect.

At another layer, there are now maps that try to chart how people interrelate – social networks, as we call them. Other maps identify how suspected criminal networks operate or how they structure domains used in specific attacks.

One major issue with maps is that we tend to consider them accurate. When we use maps in our daily lives, they generally show us the way from point A to point B, and they are always right. This is because of a fundamental feedback loop. When I cross from point A to point B, others have likely crossed from point C to point D while meeting the same road. If the map is inaccurate, errors get reported and fixed very smoothly. There’s a lot of traffic, after all.

Our network maps however compare much better to those built hundreds of years ago. They were created by a single person visiting a new region or continent, and contained errors. From 1605 to 1722, for example California was regularly painted on maps as an island.

In addition, maps are often used to sell beliefs. They aren’t necessarily wrong, they just present the world as it exists in the cartographer’s mind. Try grabbing maps of the Spratly Islands from various East Asian countries, or maps of the Middle East from Israel and Syria.

As security professionals, we all meet organizations maintaining network diagrams that do not fully match reality. Their perimeter is not where they thought it was, or various hosts are exposed in ways not fully realized. Making good risk management decisions starts with great asset management, and this requires you to keep your maps up to date. From experience, it appears to me that smaller organizations have problems keeping smaller diagrams up-to-date, while larger organizations have really good detail diagrams for individual solutions, but are lacking insight in their overall, distributed network environment.

Some ways to remediate this:

I'm very interested in hearing from you on measures you've taken to deal with these issues.

Keywords:
0 comment(s)
Join us at SANS! Attend with Maarten Van Horenbeeck in starting

On behalf of the volunteer handlers of the SANS Internet Storm Center, I'd like to pass along our deep appreciation to all of the readers who sent in hundreds of comments and ideas during the past month!  As promised, below is an index to all of the Cyber Security Awareness Month diaries that were published over the past 31 days.  We are working on producing a full document that has all of the submissions (cleaned up, reformatted, and sanitized if needed) that were received.  As you can imagine it will be a while before it's ready for downloading due to the volume of information that was sent to us.  If you have any final thoughts or want to add some additional tips to the subjects, please send send them to us via our contact form.

1. Establishing a User Awareness Training Program
1 Penetrating the "This Does Not Apply To Me" Attitude
2 Multimedia Tools, Online Training, and Useful Websites
3 Getting the Boss Involved
4 Enabling the Road Warrior
5 Social Engineering and Dumpster Diving Awareness
6 Developing and Distributing Infosec Policies

Keywords:
0 comment(s)
Join us at SANS! Attend with Marcus Sachs in starting